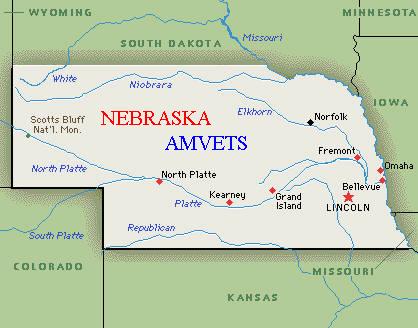 The AMVETS Department of Nebraska was officially established in 1994. Foresighted veterans of other Organizations recognized the shrinking numbers of combat and combat-era veterans who were meeting eligibility requirements to join VSOs [Veterans Service Organizations]. What they determined was that a whole lot of young folks were out there who had served, but who were not necessarily eligible for their own Organizations [i.e.: V.F.W. (Veterans of Foreign Wars), The American Legion, D.A.V. (Disabled American Veterans), etc.]. With the more recent global situations, obviously times have changed! Conflicts have continued to arise and the number of veterans in need of guidance and assistance has grown. Perhaps we should review the history of AMVETS Nebraska to help put this all in perspective.

In 1943, comrades returning from the battlefields of WWII (Europe and the Pacific) got together to express their concerns regarding receipt of their earned rights garnered from their service. At that time it was a loosely connected coalition of veterans clubs. The National organization was formed in Kansas City, MO in December of 1944, and its name was chosen as the American Veterans of World War II. Its three key goals were (1) to promote world peace, (2) to preserve the American way of life and (3) to help the veteran help himself. Newspaper headlines quickly shortened its name to AMVETS. (Too long a name for newspaper headlines!!)

On 23 July 1947, President Harry S. Truman signed the charter establishing AMVETS as a Federally recognized Veterans Service Organization [VSO]. Just a note, but at one time the name had grown to become the American Veterans of World War II, Korea and Vietnam. It has now been officially shortened, again, to AMVETS, or American Veterans, although our purpose has not really changed – promoting Peace, preserving the American way of life, and helping every veteran help himself.

Over time, AMVETS has grown into a large, influential Organization. Members who belong to Posts ranging from 10 members to over 2,000 in some cases! In Nebraska, the largest Posts can only claim somewhat over 100 members. Still, we count and we are a part of what gets things done.  AMVETS Nebraska is a part of National District V (5) which is comprised of five states: Kansas, Nebraska, North Dakota, Oklahoma and Texas.

We are still a grassroots Organization. We get things done through and because of our members, their efforts to help each other, their fellow veterans and families, and their communities. All of this continues to support veterans at the local, state, and national levels of the organization. At all levels, our primary goal is to assure that all veterans receive the benefits they have earned through service to our Nation.